The name Richebourg literally means “rich town”, but how the vineyard acquired the name is not clear. The 8-hectare (20-acre) site is the second-largest grand cru in Vosne-Romanée, just slightly smaller than Romanee-Saint-Vivant. It is of average size when compared with all Burgundy Grand Crus, but those in Vosne-Romanée are known for the fine-grained definition of their boundaries and terroir. In fact, the Richebourg vineyard increased in size in the 1920s, as one producer successfully lobbied the local government to have their land included within the boundaries.

Richebourg lies on the same part of the slope as Romanée-Conti, and the two share a similar terroir. The soils here are made up of pebbly clay and sand overlying a hard limestone base. This friable soil, along with the gradient, means that the vineyard is well-drained, which helps reduce disease pressure as well as limiting leafy vigor, giving concentrated, balanced grapes. Richebourg’s easterly aspect also contributes to the terroir, giving the vines access to the morning sun while protecting them from cold westerly winds.

In terms of ownership, Richebourg is a kind of stepping stone between the fragmented plots of Clos de Vougeot and Echezeaux to the north and the monopoles that characterize the rest of Vosne-Romanée’s grand crus. Domaine de la Romanée-Conti owns just less than half of Richebourg’s land, and Domaine Leroy, Anne Gros and Gros Frère et Soeur also have plots in the vineyard. The legendary Henri Jayer made a Richebourg wine until his retirement in 2001 – the remaining bottles are some of the most expensive and sought-after wines in the world.

Richebourg is one of the six grand cru sites in the hallowed village of Vosne-Romanée, in Burgundy’s Côte de Nuits. It is one of the larger sites in the village, and is famous for its full-bodied, muscular style of Pinot Noir. Richebourg wines are in fact some of the most opulent from Vosne-Romanée, exhibiting earthy characters along with dense fruit, and they are capable of being cellared for many years. 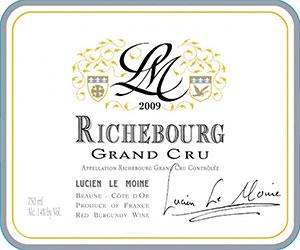 The climat is Vosne-Romanée’s northernmost grand cru, situated on the midslope of the Côte d’Or. It sits immediately adjacent to the La Romanée and Romanée-Conti sites, and the Romanée-Saint-Vivant climat is on the slopes below. The famous Cros Parantoux Premier Cru vineyard, often considered to be worthy of grand cru status, is on the slopes above Richebourg.